SO finally we made it out of Peru...but not for long, since we will actually be returning with Gaizka´s parents in a few weeks. But for now, we are in Ecuador with our friend Berti. We arrived yesterday after spending a relaxing 3 days on the beaches in Mancora in northern Peru. Our entire time there consisted of getting up, going to the beach, eating lunch, playing cards, and that´s about it. We had a great time, except that Gaizka suffered off and on from a stomachache, poor guy.
We are currently in the beautiful colonial city of Cuenca, which slightly resembles Cusco. The streets are cobble stone-style, and overall the city has a tattered European vibe to it. We arrived last night and booked ourselves in a cool funky old house-converted-hostel. This morning we got up and had breakfast in a nice cafe on the plaza, then we meandered around the city visiting the free museums and arts and crafts shops. For lunch we ate at a small Mexican restaurant owned by an American/Ecuadorian couple. No matter where you travel in the world, I guess there will always be Mexican restaurants because the food is so good and the gringos love it.
Tonight we´ll head to a town called Alausi, once again in the Andes. More to come! 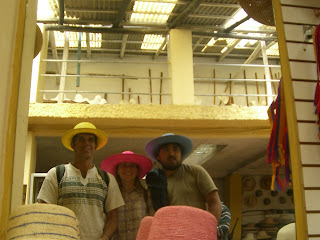